From Dayton, Ohio to Roeselare, Belgium via somewhere in southern Spain: how these bikes made it to Koers.

8min reading time   by Alasdair Fotheringham on 07 March 2022
Perhaps it’s only logical that in 30 years working as an international news correspondent and a cycling correspondent, at one point or another this reporter was always going to get some very odd commissions.

For example? Reporting in Barcelona for The Independent newspaper from the world’s annual toilet paper manufacturer congress, Tissueworld, was a strange one to say the least. (The undoubted highlight in an already surreal event: the rapturous welcome given one Portuguese company’s presentation of their new brand of black-dyed ‘sexy’ toilet paper.’). On the cycling front, multiple interviews for various outlets with the charming, if eccentric, German inventor and Devil-costume wearer who stood on the roadside of the Tour de France for nearly three decades, Didi Senft were always a somewhat strange experience.

However, surely few commissions for journalists have led to such an unpredictable spell of work as the proposal contained in this email which landed a few months back.

Initially, only one answer was possible to such an unusual request: No.

But then as the weeks ticked by, the intriguing nature of this commission plus my long-standing love of logistical travel puzzles seemed too good to miss. (What did an American track bike from over a century ago actually look like? Why on earth were they in Spain? What would be the best way of getting them to Belgium? Train? Car? And so on and so forth…) I said I’d help.

The start of an unexpected journey

However, as I gradually found out more about the bikes - it turns out , Dayton Ohio, was the area that produced a huge percentage of the US track bikes in the 1890s and early 1900s, including several of these - the drawbacks of the trip itself began to multiply. For several reasons, using a normal international transport company was too complicated for this particular operation. So that meant I'd have to take a van. Then much time was spent poring over potential road routes on Google maps from the location where the collector lived - a very small coastal town in the middle of nowhere in southern Spain - to Roeselare. Then there were the labyrinthine different series of prices for van hire companies, and the price of petrol, tolls, hotels with ultra-secure carparks (I briefly had visions of sleeping surrounded by half a dozen 19th century track bikes, having taken the bikes into the hotel bedroom like Miguel Indurain’s mechanics did with his bikes before time trials, to be sure they were safe?) and so on. And so forth.

Finally, though, the idea of doing a round trip of 4,500 kilometres, first to the collector, then to Belgium with a load of track bikes and back to Spain was dropped. Even the added attraction of stocking up on Belgian beer to act as ‘ballast’ in the empty van for the road back to Spain was not appealing enough. Apart from anything else, the ongoing restrictions from the COVID pandemic made it hard to know what would happen each time I crossed a border. But even as the COVID situation in Europe slowly started to improve, the deadline set by the collector of a final pickup date of February 10th was looming. Something had to be done. 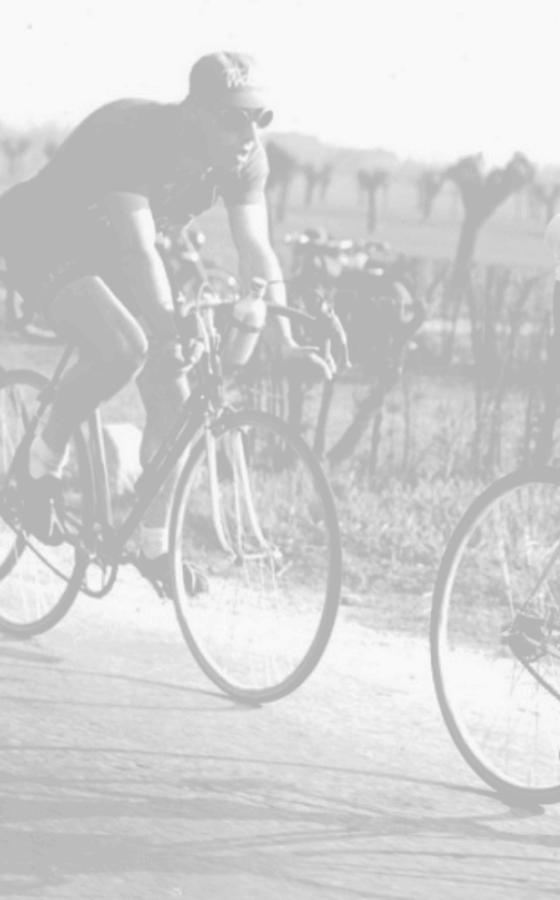 Head badge of a track bike produced by The Davis Sewing Machine Co.

Dayton, Ohio, was best known at the end of the 19th and the beginning of the 20th century for two things: the production of track bicycles and aviation. In both cases, the manufacturers were absolute pioneers on the American continent. Players such as The Racycle Company and Dayton-Wright Airplane Company were synonymous with top quality and innovation.
Track cycle type Racer, SHB, Newport - New York, ca. 1890 - 1910

The collector is an American who emigrated to Spain and wishes to remain anonymous. His collection focused on the American cycling scene around 1900. In addition to a few unique racing bikes, he also collected wheels, handlebars and other parts, all made in the USA. Due to an impending move, he contacted KOERS with the proposal to donate his entire collection to us.

Before the collection was picked up by Lotto-Soudal, it was packed in bubble wrap and temporarily stored in a cellar. Then came the day of transport. The bicycles, and objects connected to them, were moved to a hotel in Gaudix. In the pouring rain, they were transferred to the team caravan.

Service Course of Lotto-Soudal in Herentals

After 2000 km or a road trip of more or less 24 hours, the bikes arrive Tuesday morning at 1 am in Herentals. They are given a few days of rest in the service course, before being prepared for their finale trip to Roeselare.

The bicycles are all rare, especially in Europe, and reflect the popularity of cycling in the United States in the early 20th century. They are also a good example of American craftsmanship. The unique character of the collection aroused the attention of KOERS. After registration and research, the bicycles will be exhibited in rotation in the museum.

In England, we like say that "even a stopped clock tells the time twice a day," and after a lot of brain-racking, certainly something clicked in my head. Every February Spain is swarming with Belgian teams taking part in the early season races, from the Challenge of Mallorca through to the Volta a la Comunitat Valenciana to the Ruta del Sol in Andalucia. Then they head back for the Opening Weekend. Surely if we could get the cycles from the collector to one of these teams at the end of their race schedule, then they could drive the bikes to Belgium in their bike storage and repair truck?

Phone calls by the Koers museum to different teams brought different answers. Some wanted to help but some of their staff were down with COVID and they had only a limited infrastructure in Spain. In other words, no space for six track bikes, several pairs of wheels, a big box of handlebars and so on. But Lotto-Soudal finally gave the thumbs up, although as their sports director on the ground made clear, the handover could only happen on the evening of the second last stage of their last race, the Ruta del Sol. Before then, and perfectly logically, they needed the truck free of excess material.

A pitstop between cats

However, we still had to get the bikes from the collector before the February 10th deadline and store them somewhere safe until the bikes could be taken to the Lotto-Soudal team. So it was back to trawling the Spanish van rental websites, this time to book a vehicle for a much shorter round trip of 600 kilometres from the family home near Granada to pick up the bikes.

A date was set with the collector and following useful recommendations from the KOERS-curators, a special, very large order of multiple rolls of plastic bubble wrap and heavy-duty sellotape placed with the local ironmonger’s store. Then duly armed with Google maps, bocadillos, tubes of bubble-wrap and with a colleague with a long experience of large van driving taking the wheel, off we went to find some century-old American track bikes.

The pick-up itself was relatively straightforward, although we had another chance to appreciate what an usual mission this was when the collector casually pointed out that American track bikes of this era were a rarity in the USA and virtually unheard of in Europe. Or in the world, for that matter: it turned out, as he told us, that only he and two other people anywhere on the planet had full collections of the same kinds of bikes.

Then after a four hour drive back, the usual residents of my basement (ie the cats) were given a new temporary home, the bikes placed inside instead and - now we had some time to kill - finally a full bubble ‘wrap’ of each one was carried out, right down to the pedals and bars.

Now all we had to do was wait for Lotto-Soudal and the Ruta del Sol to turn up in the neighbourhood. And make sure the cats didn’t break into the basement in the meantime.

After nearly two weeks, the red and white trucks and buses of the Lotto-Soudal appeared for a two night stay in the the nearby town of Guadix. Some 40 kilometres from the finish that day, nearly 100 kilometres from their new temporary location south of Granada.

Cue yet another trip to the van hire, yet another promise of several large beers to my van driver friend, one quick loading up of the bikes in the van and the time for the meeting was set: 7 pm, after the second-last stage of the Ruta del Sol/Vuelta a Andalucia had finished, in a glamourous location of a motorway service station hotel forecourt.

The only thing we couldn’t control was the weather: after months of drought in Andalucia, at 6.55 pm precisely it began to bucket it down.

No matter: the Lotto-Soudal mechanics, headed by Noel Vermeesch, were there waiting for us. A quick check and explanation and in less than ten minutes, the bikes were out of the van and into the Lotto-Soudal truck and ready for the second last leg of the trip, to Flanders. Distance? 2,000 kilometres. Time? Well…

From one service course to another

Normally the trip takes a little over 24 hours, Mr. Vermeesch later told me, a trip he did solo and none-stop from Andalucia to the team base in Herentals. He and the truck left the team hotel on Sunday night at 4 pm he said only for it to break down near Bordeaux. Cue a four hour wait and then on he went, finally reaching Belgium at 1 am on Tuesday morning.

“It’s the longest single drive of the season, and I only sleep for three or four hours, but we get by ok,” he said. “I listen to a lot of music, I have a playlist on the phone, I just chill.” By Friday, in any case, when the museum came by to pick up the bikes, he was already on the road again, heading for two one-day Classics in southern France. But the bikes themselves were finally en route from Herentals to Roeselare and a new home.

“Right now I’m too busy, but I can, though,” Mr. Vermeesch says, “I’ll go and see them one day in the museum. I’m curious to see what they’re like.” He’s surely not going to be the only one.

From Deruyter to D’Hoore: a century of omnium history

What do the athletics decathlon and heptathlon, modern pentathlon (fencing, swimming, horse jumping, shooting and athletics) and triathlon have in...

Shimano versus Campagnolo. Teething trouble on the Muur

In 1921, exactly 100 years ago, Shozabura Shimano started his business of making chain rings for bicycles in Japan. After the Second World War,...

Sightseeing at Lotto-Soudal. Visiting the service course of a professional cycling team

Flanders is race, race is Flanders. Not surprisingly, our flat country is home to a lot of service courses of foreign cycling teams. Team Sky...

Your browser does not meet the minimum requirements to view this website. The browsers below are compatible. If you do not have one of these browsers, click on the icon to download the desired browser.